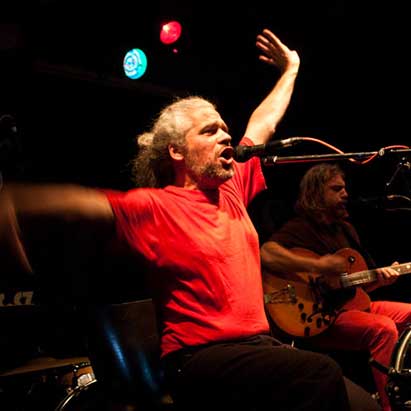 Ty Syčáci band originated in 2000 as an initiative of Petr Váša, one of the most notable personalities on the Czech alternative scene. Váša is an extraordinary singer, lyricist, performer and experimenter, the only Czech musician who can play literally with his whole body (he himself describes this style, which brought him fame already when performing one-man shows, as „physical poetry“). His band mates in Ty Syčáci are Petr Zavadil (guitar) and Tomáš Fröhlich (bass guitar), both ex-members of Pluto. The band has been already playing in Czech clubs since 2000. To categorize the music of Ty Syčáci is a hard nut to crack for many music critics: the style of the band resists being classified. In general, it can be said that it includes rock, jazz, Moravian folklore and world music. This unsubsumability results in a very wide range of audience – from high school students to seasoned lovers of classical guitar rock.